Lizz Murphy's lovely new chapbook PORTRAITS has just been published. There are 54 short and pithy poems which reflect Murphy's sharp eye. She's a visual artist as well as a poet and an excellent reader. Go to her page on the PressPress site to find out more. 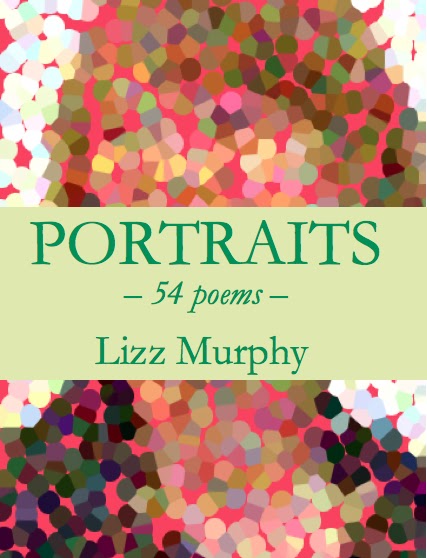 Posted by Chris Mansell at 12:40 AM No comments:

Email ThisBlogThis!Share to TwitterShare to FacebookShare to Pinterest
Labels: murphy 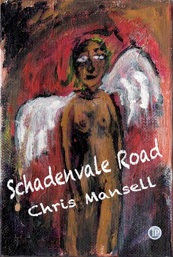 A first collection of fiction after a long list of poetry titles, Schadenvale Road, will be launched by publisher David Reiter (Interactive Press) on Saturday 26 March at The Tea Club in Berry St Nowra. The Tea Club is not a club but a cafe, and we'll be outside if the weather is lovely. If not we'll be inside where we can admire the accompanying exhibition of angel photographs and paintings which will be opened at the same time. Jo O'Dowd's original cover painting will be among them.

The launch will be about 1.30 pm but come about 1pm and buy some lunch and generally have a nice day, and recover from what will be a trying electoral experience for some.

Email: info@chrismansell.com if you need more directions etc, otherwise, just turn up with all your friends.
Posted by Chris Mansell at 6:46 PM 1 comment:

If you're in Perth, WA, or near Perth WA, you should get yourself down to The Moon on Sunday 20 March when Janet Jackson's q finger will be launched amid readings, drinks and with that passionate flair so characteristic of The Moon readings. It's always a good time there, but it'll be a real blast. Groovy in fact.

The 2011 PressPress Chapbook Award is now open for entries. You can go to the site for the conditions and an entry form, but the general idea is: a chapbook-length manuscript by 15 May. Last year's winner was B.R.Dionysius with The Negativity Bin which is being launched on the 24th March in Ipswich (Queensland). Make yours the next winner. Money, fame, glory, publication. It's a wonderful life. 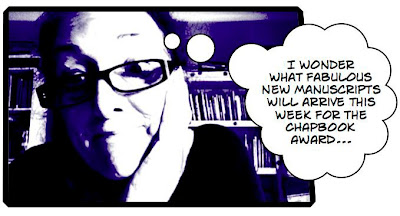 Posted by Chris Mansell at 6:32 PM No comments:

Go to the wonderful launch Brett Dionysius has worked out with artist  Jodie Weller  at Ipswich, Qld, on 24 March 6 pm. The SWICH Contemporary Artspace. RSVP to theswich.info@bigpond.com. Don't miss it. 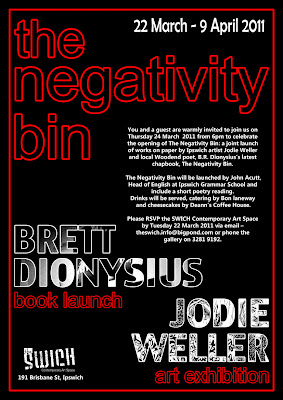 For more about the work of B.R.Dionysius go to his page of the PressPress site.
Posted by Chris Mansell at 9:35 AM No comments:

Saw my new Schadenvale Road for the first time last night at the Interactive Press Soiree and met some lovely new people and caught up with some friends as well. Here's me and David Reiter, Director of Interactive Press and the new book: 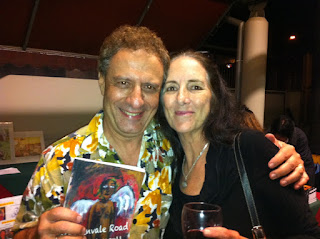 Posted by Chris Mansell at 9:39 AM No comments:

Email ThisBlogThis!Share to TwitterShare to FacebookShare to Pinterest
Labels: fiction 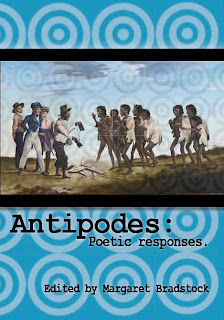 There seem to be a few new poetry anthologies around lately - some with editorial decisions which defy rationality - but Margaret Bradstock's Antipodes anthology, which deals with responses, both black and white, to the 'settlement' of Australia, has been put together with intelligent good sense, a wide poetic net and a deal of academic rigor. It has a forward by Elizabeth Webby and an introduction by Margaret Bradstock.

Poets include Henry Parkes and Mary Gilmore, Kenneth Slessor and Oodgeroo Noonuccal, Lionel Fogarty and Judith Beveridge - all up, about 80 poets* you know and love and/or hate. There are omissions. There are always omissions but you can at least have an argument with it. It's labelled 'a first collection of poetic responses' which suggests that there might be further collections, expanded editions, I don't know. This one is worth getting.

There is a launch on Sunday 20 March at 2.30pm for 3pm at the Randwick City Library (upstairs at the Royal Randwick Shopping Centre), 73 Belmore Road, Randwick. If you're coming let Margaret Bradstock know on: margbrad@tpg.com.au

If you can't make it but want to order a book ($26.95 plus p+p) email the publishers, Phoenix Education, at service@phoenixeduc.com


*One of whom is me, but I would have had to admit all of the above, probably grudgingly, even if I weren't in it.
Posted by Chris Mansell at 3:02 PM No comments:

Chris Mansell
Australia
Australian poet and writer in other genres. The content of this blog is copyright. Please contact Chris Mansell at info@chrismansell.com for permission to use items or photographs.